Latvian Automotive Club presents concerns on implementation of new speeding rules
Concerns regarding the implementation of a new public private partnership in Latvia on speed enforcement was a priority issue discussed when FIA Region I representatives met with Mr Juris Zvirbulis, President of the Latvian Automotive Club (LAMB), on 31 October 2012.

The scheme has been received with some concern by Latvian car users as the private operator receives a fixed percentage of the collected fines, raising fears that the operator could therefore be more interested in making as many drivers pay as possible, rather than securing safe driving within vulnerable road stretches.

The crisis in Europe for the automotive sector in the last 3-4 years has had an impact on the key business areas of the Club with a drastic decline in car purchase and usage. The market for club services has picked up since the worst part of the crisis in 2009, but activities are still at a lower level than before the crisis.

Cooperation with the FIA Region I activities such as the Roadpatrol Contest, the European Traffic Education Contest and Middle Management Workshops were also discussed, with LAMB expressing its interest to continue to play an active role in future events. 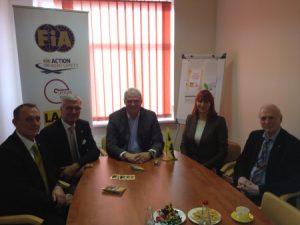 How could you describe the new possibilities and benefits for the automobile clubs after joining FIA?

Joining the FIA means that you are part of a network of 232 national motoring and touring organisations from 134 countries worldwide. Being part of the FIA family provides the opportunity to exchange best practices with other Clubs who face similar challenges in areas such as membership services, Club activities, communications or management development.

The well-recognised name of the FIA allows Clubs nationally to show that they are part of a broader international network. Being a member of the FIA also means that support can be provided for urgent requests for cooperation with other Clubs or when know-how is required for specific challenges which Clubs may face.

There are different visions on the future mobility in the cities. Some people see them free of any carbon emissions, where the main elements of mobility are bicycles, different kinds of electrical cars, some hybrids and public transport as green as possible. Others would like to develop the cities infrastructure, building roads and parking places for private cars. In what future city would you like to live?

Developing the future of mobility in our cities in a sustainable manner is of great concern to us. It is clear that more needs to be done to improve the safety and environment of urban areas. And personally, if you ask me, I would like to live in a safe and clean city.

The main discussion will be on how this is achieved and how the different modes of transport can work together to provide the best mobility solutions for citizens. I do not believe that a sustainable solution would be found through access restrictions and charging, as this would only make everyone’s life more complicated in the city when commuting. We need to focus on developing intelligent solutions, taking into account individual mobility needs in a sustainable way.

Motorists almost all over the world are required to pay different taxes and other payments on the year bases. What is your opinion on the links between the possible rise of these payments and development of mobility?

In our view, the motorist is already paying far more than the infrastructure he uses. So any discussion on further taxation and charging should only be based on cost neutral solutions where other taxes are removed, or funding for dedicated infrastructure improvements is raised to the benefit of the user who is paying extra charges. Anything else is a way for governmental treasury departments to look for revenues in times of crisis, and has nothing to do with improving mobility.

Is the introduction of the speed cameras just the issue of the state institutions or is there also possibility for private partners to be involved?

Strengthening the enforcement of traffic rules has a clear safety benefit. Speed cameras can help to improve safety in areas which have been hard-hit by accidents, or where special attention should be made to protect vulnerable road users. Unfortunately, some countries see it again just as a cash-cow to charge road users extra even for minor infringements.

And it seems quite unfair in areas where the authorities provide poor and unclear information on actual speed limits, in which cases drivers can sometimes be punished without being aware of committing any offence. Speed limits should be followed but they also need to be clearly signposted for the consumer.

Do you believe that the targets of the program 50by50 will be reached?

Making transport greener, normally also means making transport cheaper. We welcome technological solutions which can lower CO2 emissions, because not only do you get cleaner air, you also get lower costs on fuel. Incentives for clean and efficient transport are always welcome, however, we should not focus on any specific technology but focus more on deploying efficient technologies. The return on the investment for the car buyer can be quite rapid taking into account the current fuel prices.

The European Commission’s proposed target of 95g/km for CO¬2 emissions from passenger cars by 2020, is a realistic target and we fully support that approach. For an average car, the Commission estimates the consumer will save some €340 in the first year, and a total of €2904-3836 (depending on the price of fuel) over the car’s lifetime (13 years), as compared with the previous 2015 target. The higher the oil price, the greater the overall savings will be.

We do not see any proof of more modern, fuel-efficient cars being more expensive for manufacturers to produce, so do not believe it will not be that much more costly for the consumers when buying the car when comparing with the estimates of manufacturers. Again we all benefit from lower consumption.

One of the serious questions discussed in FIA is aged people and driving. Somebody thinks that seniors are driving even better than younger people, other think that the aged drivers provoke dangerous situations on the roads and their skills should be tested? What do you think about these different opinions?

One of the major concerns for road safety is young drivers, and mainly male drivers. We do not believe senior drivers are more dangerous in traffic, but believe that a lot can be done to help them learn more about new technologies in cars both on the safety and support side. We all can benefit from improved driver training both in terms of safety but also in terms of finance when talking about ecodriving skills. There is a need for different training for different age groups. Many of our Clubs are involved in these activities and have seen the benefits of being in close contact with their members through the provision of additional training services.